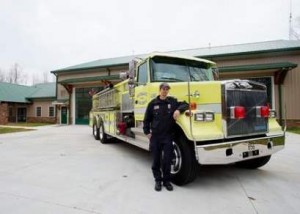 SOUTHMONT | A second station for the Southmont Fire Department is expected to provide a quicker response time and reduce insurance costs for some residents in the district.

Firefighters recently began operating out of a new station on Rockcrusher Road. The new building, which came at a price tag of about $1 million, was constructed by Lexington-based LMI Builders and was completed in November. The building serves as a substation for the department, and the station on N.C. Highway 8 remains the main station.

“It helps everybody in the Southmont community because it puts personnel and apparatus on the north end of our fire district, which means anything that happens this side of our fire district is going to get a quicker response with the substation being here,” said Perry Tyler, president of the Southmont Fire Department Board of Directors. “It benefits everyone in the community, as well as our neighboring departments.”

Construction on the facility began in January, and the project was completed on schedule. The station is located on 27 acres purchased about two years ago by the department. The 11,000-square-foot building, which has four bays for fire trucks, is being financed with a 15-year loan, and the building will not result in a fire tax increase, Tyler said.

Tyler said there have been talks about a new Southmont fire station for about five years. The fire station, in particular, will aid residents in the Watership Downs subdivision off of Linwood-Southmont Road with their insurance rates, the board’s president said.

Tyler said there are plans in the works to have paid firefighters around the clock at the Rockcrusher Road station. But for now there will be paid firefighters manning the new station from 8 a.m.-5 p.m. Monday through Friday. The department has 24-hour paid personnel at the N.C. 8 location. Both locations can be used for disaster relief if needed.

“I believe it’s a nice asset for the community, being set up for a disaster relief area, and it is decreasing response times to this end of the district, ” Alan Goodnough, a Southmont firefighter, said of the new station. “Everybody seems to like the building.”

By Darrick Ignasiak The Dispatch

It is the mission of Southmont Fire Department to provide fire protection and/or suppression of loss of life or property to all residents of the Southmont community and to assist other agencies when called upon to do so.